There's a school of thought whereby hikes along circular routes are viewed as hikes to nowhere. But even while I have to admit to often having a sense of accomplishment from going on hikes that take one some distance from one place to another, I have come to be able to enjoy certain hikes along circular routes in terms of the journey itself yielding so many enjoyable sights and experiences.

Among these is the 9.5 kilometer hike around the Shing Mun Reservoir that I went on with my regular hiking companion earlier this year. Taken on a misty as well as cool day, this excursion which began and ended at the Pineapple Dam (named after the pineapples that were cultivated in the area in past times by Hakka farmers) still yielded some surprisingly good views of the Shing Mun Valley and reservoir; some of which I managed to capture with my trusty camera:- 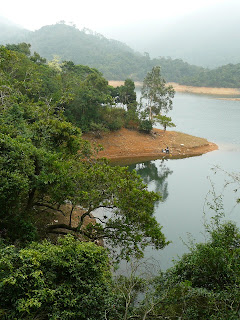 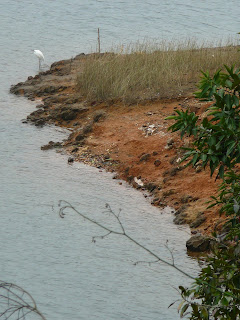 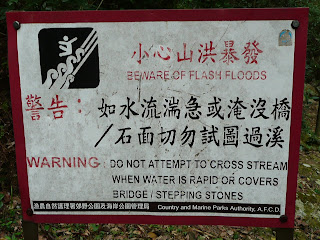 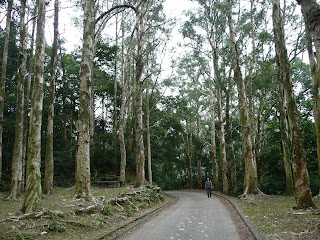 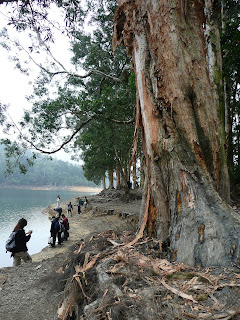 A little further along, one can detour
to a scenic edge of Shing Mun Reservoir 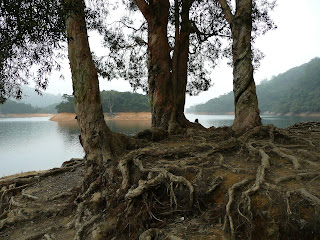 The kind of visual some people might not believe
can be had in Hong Kong :) 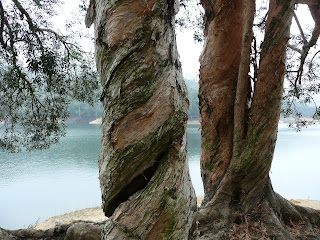 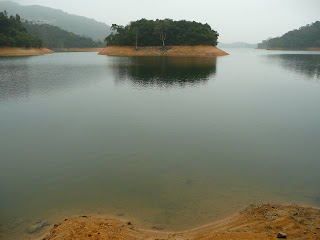 A shot that's similar to one that can be found in
Revenge: A Love Story (one of many bits of evidence
that got me thinking that the film's location scouts
have done some hiking in Hong Kong's country parks!)

And yes, of course there's another photo-essay of this hike to come! :)

Did you hike before or after going to Sham Tseng? The one and only time I've been there was to eat the goose after hiking in nearby Tai Lam Country Park.

As for Shenzhen: have never been there to do anything, never mind hike! :O

Those are really gorgeous trees, and really gorgeous photos of them! For some reason, a circular hike appeals to me, possibly more than one during which I would just retrace my steps.

I'm still thinking I might be going to Hong Kong for a conference in August, and I just found myself wondering if I should plan to pack hiking boots! What kind of shoes do you wear on your hikes?

Oh most definitely re circular hikes being more appealing than ones which require you to retrace your steps! :D

Hong Kong in August is on the hot and humid side... so hiking may not be something you really want to do. Or if you do, figure you'd probably be happy with the easier hikes in which case cross-trainer type sneakers might work. But FYI, the shoes I hike with are Technica hiking boots. :)

The trees are very beautiful as are the vistas.

Am glad this photo-essay caught your eye. :)

hi guys kindly help me to find the locaationnof paper bark tree in shin mun country park... need to take some pjoto there for school projrct about tourism

Walk (probably minimum 20 minutes, maximum 45 minutes) to the north of the Pineapple Dam of Shing Mun Reservoir. You should find a number of paper bark trees in that area.