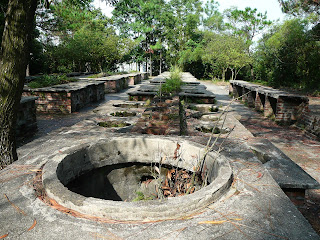 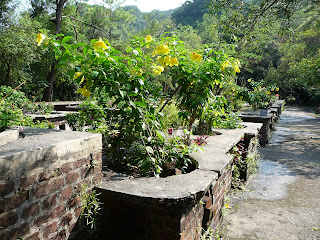 Seasons greetings -- and thanks especially to those Photo Hunters and other visitors of Christian faith who are taking some time out of their festive program to check out this Photo Hunt entry! (Though, of course, I'm happy to get visitors of any faith -- especially those who *hint* *double hint* leave nice comments on this blog -- any day of the year... :b)

And now to this week's theme -- for which I found a plentiful number photos in my archive that would fit but ended up settling on the two above of large outdoor stoves built in anticipation of such facilities being needed for people fleeing from the invading Japanese military forces who already had been waging a war in China since 1937. (The Sino-Japanese War of 1937 to 1945 was the largest Asian war of the 20th century and, after the Japanese attacked Pearl Harbor and launched near simultaneous invasions of Malaya (now West Malaysia) and elsewhere on December 7/8th, 1941).

Accessible via the Quarry Bay Tree Walk, these emergency kitchen facilities are now located within Tai Tam Country Park (Quarry Bay Extension), a place of natural beauty and general quiet these days that actually was a bloody battleground for a time in late 1941. As it turned out however, fires were never lit in earnest inside of these circles because the Battle of Hong Kong lasted for less than a month -- beginning on the morning of December 8th, 1941 (less than 8 hours after the attack on Pearl Harbor) and ending with a formal surrender on Christmas Day that year.

Close to six decades on, these outdoor stoves remain to serve as silent reminders of a time of turbulence that there hopefully will not be a repeat of any time soon -- but, also, if one were to take a closer look, a more innocent function. That is, someone has (or some people have) decided to turn a number of these idle stoves into flower pots out of which a variety of plants grow!

On a day when the general sentiment is to wish peace and goodwill to all men (and women), I'd like to leave you with the image of colorful life growing out of something built in an atmosphere of fear and foreboding. In addition, here's also pointing out that on Christmas Day 1941, within hours of Hong Kong's surrender to the Japanese invaders, a group of British and Chinese military men managed to make a daring escape with the help of Chinese guerillas and local villagers -- and this daring feat is currently being commemorated in an exhibition at the Hong Kong Museum of Coastal Defence that runs through to December 2011.

Thanks for the interesting history lesson!

And Mele Kalikimaka to you! (That's Merry Christmas in Hawaiian.)

Hi YTSL, a wonderful idea turning these outdoor stoves into flower pots. i also enjoy learning about the historical background .

Love your take on this week's theme. Happy Holidays and a very happy New Year!

When life gives one lemons, make lemonade out of it. :P

interesting bits of history. i was just watching "WW II Lost Tapes" in the History Channel.:p

i have seen outdoor stoves like these. and curious that people thought of building something like this in the time of war.

Peace be with you!

Thanks for visiting and liking the history lesson -- and for your good wishes too. :)

I'm not completely sure that what's been done to those outdoor stoves is legal -- but have to say that I do think it a good idea too. And thanks for the good wishes. Hope you have a good 2011 too. :)

Hear, hear and happy holidays to you. :)

It's interesting in retrospect to see how people thought they should prepare for war(time), isn't it? Alas, many good intentions end up coming to nought -- I just hope for less war -- period.

Your country´s history is very interesting. I like the silent reminders of the war, which today are filled with beautiful flowers.
Merry Christmas!

I think it is goodly that these now serve as flower pots legal or not. Season's Greetings my friend :) Happy weekend and happy photo hunting!

Nice take on the theme. Interesting facts to learn in the photos.

I'll take what you wrote as a compliment. But Hong Kong is not a country (but a part of China) and even more sadly, I'm currently a resident of Hong Kong but my home country is Malaysia. At the same time, yeah, Hong Kong really can feel like home -- and I hope I'll be here for a while yet. :)

Happy weekend and Photo Hunting to you too -- and thanks for considering me your friend. :)

Happy holidays to you and glad you found this entry to be informative. :)

What a history..Thanks for sharing. Merry Christmas.

interesting information! I like it that the place was maintained after all these years. merry christmas!

A wonderful post for this holiday!! Best wishes to you.

What a great post for the theme and for this time of year. It is so important to remember these significant times and new life growing there is uplifting. I didn't try to do photohunters this week but appreciate your visit. Happy holidays.

Interesting post. I was in Nepal for Deepavali one year. Such colour and energy.Merry Holiday Season to you.

May time and life find these circles closed, creating a 'spiral of hope'.

Please have a blessed Christmas time and great Sunday as well.

Thanks -- and happy weekend/holidays to you too. :)

Maintained... but in a different way from might be expected... ;b

Thanks and here's sending good wishes back to you. :)

Thanks for visiting despite your not technically "playing" the Photo Hunt game this week. :)

(Continuing the comments on your post: Deepavali is celebrated in Malaysia. And yes, the festive sights are memorable. :b)

What an interesting first wish -- but I'll definitely drink to the idea of creating a spiral of hope. :)

A wonderful post for the season. I have just recently started to learn more about the history of WWII in the Pacific. We are so focused here on the events of Pearl Harbor and rarely hear of the full details of the events at the beginning. Thanks for the information on the background and showing how something created due to need in time of war is now a thing of beauty.

I love those photos and the story behind them. It is neat to see something that was meant to prepare for fear and destruction being turned into something that spreads joy and new life instead.

Yeah, when I was living in the US, I was shocked to find that a lot of Americans thought that Japan wholly concentrated on going against the US during World War II... All in all, it becomes less just Americans/whites vs Japanese/Asians when it gets realized that the Japanese attacked others too on December 7/8...

Am glad that you got as much as you did out of my photos and entry. :)