Something about Hong Kong that should be better 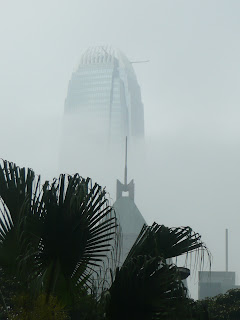 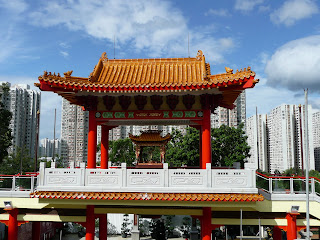 The same part of the world
on a far more beautiful, blue sky day
This morning, I woke up to bright sunshine and gazed at beautifully blue skies on the company shuttle bus portion of my commute to work. Although I may once have considered these sights to be the expected norm, I have come to treasure them as not-as-common-as-one-would like visions post moving to Hong Kong.

And this particularly after a recent couple of weeks in which we had five consecutive days of recorded air pollution index levels that were over 100 points (i.e., very high) and, more recently, a couple of rainy gray days where there was not enough sunlight to give my solar-powered Hello Kitty toy the requisite energy to sway its head! :S

So... in answer to the question I've been asked quite often of what I like least about the Big Lychee, it'd definitely have to be: the air pollution that is all too discernible visually and in other ways for too many days of the year and my time in Hong Kong. Though -- and yes, here's going back into Pollyanna mode -- it's generally quite a bit better now than when I visited a few years back and found air pollution so bad that I wondered whether I'd ever be able to live here without an oxygen tank and mask near me at all times.

What made things worse then was that smoking was allowed in restaurants and bars -- with the result that certain eating and drinking establishments had even worse air inside than outside of them. (Indeed, I remember one evening when I had to bow out mid-way through dinner with a family friend because the nicotine clouds in that restaurant were literally making me gag!) Now if only fewer -- never mind zero -- people smoked in the streets of Hong Kong... something that actually seems to be happening if these statistics are to be believed! :)

Where does the air pollution come from?

Even though I don't live in HK, whenever I visit and there's a blue sky with beautiful clouds, I am very happy.

And here's the answer from a local environmental activist organisation:-
http://www.cleartheair.org.hk/quick-stats.php

Yes, absolutely, re that first picture -- and thank goodness that that much air pollution is still a rare sight -- rarer even than blue sky days!

Your first photo is really beautiful until one learns it's air pollution not a foggy morning.


When M lived in Hong Kong she used to say smog on her face left a slight burning sensation ...Does this happen to you?

Fortunately, the HK smog doesn't have that effect on me. Neither does it have the effect that the haze from Indonesia that annually migrates to Malaysia and Singapore -- i.e., when mixed with sweat, it makes my skin itch! :(

This is a good choice for the theme. Happy hunting. Mine is ready.

"not enough sunlight to give my solar-powered Hello Kitty toy the requisite energy to sway its head!"

If Hello Kitty was a lolcat (perish the thought) one might say he "haz a sad" but in this case it isn't that far off the mark. Hello Kitty is suffering from a temporary case of Seasonal Affective Disorder, an affliction almost unknown in tropical and semi-tropical areas.

Perhaps Hello Kitty needs some light therapy to get the energy to move its head. ;-)

Seriously though-it is a nice touch that the Clear the Air organization includes cigarette smoking in their causes of pollution, putting smokers in the same class as China Power and Light. As a former smoker I applaud almost any initiative regarding it.

I have read that the air quality of (especially) Singapore and Malaysia is terribly affected by the forest fires in Indonesia. That seems to be an almost intractable since the source of pollution is from another country which has its own priorities and agenda.

Teeheehee re your Seasonal Affective Disorder for my solar powered Hello Kitty! And in turn have to share with you that my colleagues and I -- yes, it resides on my desk at the office! -- have come to think of it as a modern day tamagotchi which craves attention (as well as sunlight). :D

On a more serious note: Malaysia and Singapore have considered bringing Indonesia to international court. The thing though is that they would have more right for moral outrage if so many of the polluting companies operating in Indonesia weren't Malaysia and Singapore-owned. (Same with Hong Kong owners vis a vis factories in the Mainland China section of the Pearl River Delta.) :S