Up above and on the ground in Hong Kong 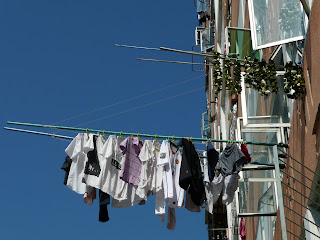 Guess what I've seen hanging above... 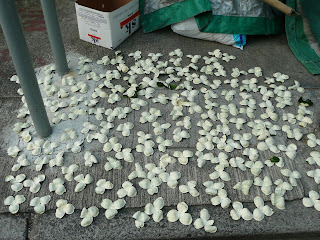 ...and spread out on the pavement
(sidewalk in American speak!)?
A local friend of mine tells me that when he walks about in Hong Kong, he likes to look up at the upper floors of buildings because often, he'll spot a new shop or two -- as some retailers have taken to setting up shops above ground level because rents tend to be lower the higher up one goes.

Like him, I like to look up when I stroll around in Hong Kong but, perhaps unlike him, I also take care to look down on the ground and elsewhere. Also, unlike him, it's less new shops that tend to attract my attention and more such items like... drying lime and tangerine peels!

Because even while it's a pretty normal and mundane thing to him, it's pretty fascinating to me that vestiges of the traditional -- such as the drying of lime and tangerine peels to use in food recipes and such by individuals, including those who seem unworried that those items will get stolen by others or mistaken as trash and consequently swept away! -- continue to exist in a territory whose marketing authorities like to call Asia's World City and tout as very much a modern kind of place in many ways... And I think I speak for more than just a few folks when I also state my hope that long may it be thus! :b

Wow... I love that picture of the drying lime peels. Before I read your post, I thought they were flowers strewn across the sidewalk.

Speaking of looking up and down, Hong Kong's bustling vertical dimension is one of the things about the city that I find most striking, whether it is the long descent/ascent to or from the MTR stations or the large number above street level commercial spaces. Not to mention the vertiginous skyscrapers and the majestic peak of HK island.

I would never have guessed what they were! But I agree with you so much that it would be a shame if old traditions were to die out. Some parts of life do benefit from progress but we're all becoming far too uniform for my taste.

Just to let you know that Yasmin Ahmad collapsed from heart attack this afternoon and now she's at ICU after operation in critical condition. Hope she'll get well soon.

Which picture? Guess you mean the one of them on the pavement (sidewalk)... ;)

Interesting that you mention The Peak but not Lion's Rock and the hills of Kowloon... but on a related note, yeah, I have to say that I love the sight of skyscrapers so near mountain-sides and peaks (and vice versa) here in Hong Kong. :)

I think a lot of traditions remain in a lot of places. It's just sad that, often times, the first traditional things to go are the visible ones -- including traditional buildings!

Heard the news (via SMS) from Ho -- only he said stroke, not heart attack. What a shocker. Hope Yasmin recovers, and soon.

oh, I definitely look up and down - you'll never know what you'll find, didn't know those were lime/tangerine peels


ps, I got a blog award for you - here's the link:
http://collectingsongs.blogspot.com/2009/07/my-first-blog-award.html

I guess it helped me to know what I was seeing because I've eaten dried pickled tangerine and lime peels!

And thanks for the blog award and kind words about my blog over on your blog. :)

Wow, drying lime and tangerine peels!! I'm totally surprised. I though someone spilled Styrofoam thingys that are used as packing material.

It's funny but until you mentioned it, never thought of Styrofoam -- I guess because, come to think of it, I see so little of it, especially in pellet form here in Hong Kong!

Drying edibles, however, I see quite a bit of here... in addition to lime and orange peels, I've seen flowers and, of course, various kinds of dead sea creatures too! ;b

Definitely re HK being a good place to walk about and take pictures -- though I have to say that some Hong Kongers are more camera shy than Malaysians. Also, one of my biggest gripes about Hong Kong is how so many Taoist temples don't allow photography inside of them -- unlike those in Malaysia, Macau and Taiwan!