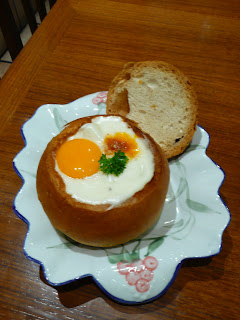 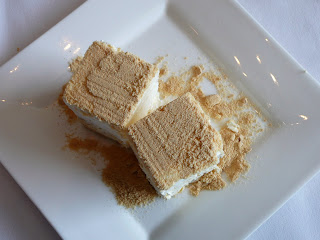 Would you travel somewhere just so you can eat there? Would you ever have its cuisine as your primary -- maybe even sole -- reason for feeling attracted to visit a particular country or city? Much to the shock of at least one friend from another culture (who finds the concept utterly alien), my answer to both these questions is an emphatic "yes".

For the record, my ultimate food destination is Japan (the land of sushi, yakitori, mentaiko, soba, udon, tempura, okonomiyaki, Genghis Khan barbecues and so much else!). But another place -- that also has the benefit of being far closer where I currently live -- that I've travelled to to eat is Macau.

On one work trip to Macau a year ago, I found myself being served the two creamy dishes that I'm highlighting in this week's Photo Hunt entry. The upper most delicacy is actually a hollowed out bread bun with creamy gravy and bits of meat and food inside of it.

And although it really would be hard to want something else after finishing it, if you do have room for dessert, I would highly recommend the very Macanese serradura -- a truly delicious dish with far more creamy -- along with crushed cookie -- bits than you'd think one whose name literally translates into English as "sawdust" would have! ;b

Great shots! And normally the initial attraction to travel destinations for us is food.

delicious, yeah, I would go there just for the food, why not?

Both of these creamy dishes look so unfamilar to me but I'd love to try them both. I travel for art first, food second. :) But sometimes the food ends up being the highlight.

Yeah, food is often the highlight of most of my travels. I love street food and always make a point of trying something new.

Speaking of cream, one of the little things that I enjoy about visiting Hong Kong is that the Starbucks there provide whole cream for their coffee. Half-and-half is as rich as you can get for your coffee here in the U.S.

Hmmm, so it's not just an Asian thing to travel for food? Good to know (and I'll be sure to let my German friend know too)! :)

Why not indeed! :b

I travel for a lot of reasons -- but with certain places, food is definitely primary, if not one of them. :)

Funny observation re Starbucks and cream in Hong Kong vis a vis the US. FWIW, the first and only time I've encountered such a thing as "half and half" -- and also 2% milk -- is the US!

I would say an emphatic yes too. Some of my fondest memories of places I've visited are wrapped around the food. Great post and your shots are making me hungry, yummy.

i would walk a mile for a particularly savoury dish or meal :)

I totally have the food in mind when I plan a trip. Some of my fondest travel memories are food related. (Also some of my funnier memories.)

Those dishes look intriguing. I'd love to try that sawdust!

Now, I dun mind having those for breakfast now....hehe

my friends & i sometimes travel to eat at a certain restaurant. but definitely not to another country (lol). your "creamy" both look delicious---the top photo is so pretty!

I'll take it as a compliment that my photos make you hungry... ;)

Relating your comment to my hiking penchant: there are some hikes in Hong Kong that end near good food spots... ;b

Then I suggest you plan visits to Penang (my home state's the food capital of Malaysia) and Japan before too long! ;b

Actually, they were for dinner... ;b

Well, technically, Macau's not another country -- as, like Hong Kong, it's a Special Administrative Region of China. But I do actually need a passport to go there though... ;b

Gastro-tourism is the best!! I don't have a sweet tooth so I always skip desserts but I ask for two spoons with my husband's choice of dessert :)
Thanks for the links and happy hunting!

Apparently most people will often come to Macau just for it's sweet treats. Portuguese egg tarts have got to be my favorite thing in Macau.:)

Gastro-tourism is the best!! I don't have a sweet tooth so I always skip desserts but I ask for two spoons with my husband's choice of dessert :)
Thanks for the links and happy hunting!

Yes, I really like the food every time I go to Italy and the cappuccino isnt't bad either!

I would say YES too!
The the first creamy dish do we make for pic-niq.
Great post and thanks for your links.

Great contribution to the theme - delicious.

To your question: Of course I would travel just to eat there or at least one of the good reason. I don't at all understand why people goes to a MacDonald when traveling - they miss a lot!

Btw: Thanks for the visit and comment on one of my Budapest posts. Your question is answered :-)

Yes, I think food is a good reason for visiting a country!

Those both look good.

Such delicious photos! Have a great weekend

Yes, will travel for food! I love that egg presentation :-)

Yes, Macau is famous for its sweets. (I have a friend of a friend who's apparently totally enamored by Macau's almond cookies and I definitely love the Portuguese egg tarts found in Macau.) But some of its main course dishes are often pretty good too! :)

Italy's another place I could see myself travelling to for the food -- and art! :b

Wow, really re that first dish looking familiar to you! And thanks for making use of the links. :)

Glad you like my contribution and thanks for answering my query over on your blog. :)

Am getting the distinct feeling that there are quite a few foodies among us Photo Hunters! :b

Thanks, and hope you have a good weekend yourself! :)

Have adventurous palate will travel? ;b

That dessert especially looks yummy! I have had desserts with a graham cracker crust that look similar to that. And it makes my mouth water. I'd go somewhere just for the food, too. ;-)

I don't actually travel to places for the food, but it is certainly a bonus in some countries.

I have a friend who was born and grew up in Macao and she speaks fondly of the food.

Aww your photos make me crave these sweetsss...Nice pictures for the theme..great

I knew it... so many food entries and I am so hungry and a diet would not be a good thing to start today with all these temptations. That last picture reminded me of a dessert in Columbus, MS.. it looked like it.. we called it Caramel Almond Delight and it was light and creamy with the almond flavor and a warmed caramel drizzled over the top with slivered almonds and coconut... I miss that.
Mine is up here.

I'd love to eat in Japan sometime. You have my mouth watering.

Perhaps I wouldn't travel to a country specifically for the food, but it would sway my choice. And I would most definitely visit a city to eat at a particular restaurant, and often have done.

Lovely food and shots. I will start with the sawdust, thank you. :)

I like the hollwed bun with a creamy soup inside. It's being served at Delifrance and Swenson's in Singapore.

I can attest that that dessert is yummy. Like it a lot! :)

Or your plain creamy thangs? ;b

Your Macau's friend the "twin" you've mentioned before, right? :b

Well, you added to the calorie-filled entries this week. So hope you didn't decide to go on a diet this weekend! :D

Japan is wonderful. Tons of eateries all about. Some smaller than others, some more difficult to find than others -- but, thus far, I've yet to eat a bad meal there! And the appreciation of the Japanese when they realize you love their food too... it's really great! :b

Hmmm dessert before a main meal? Though I've been known to order serradura for tea... :b

Wow, it does sound like quite the European thang, doesn't it? Well, Macao's got Portuguese cultural connections. So... makes sense, I guess! :)