Back in 2007, at the height of summer, a friend took me on my first post-move-to-Hong Kong hike along the Hong Pak Country Trail in Tai Tam Country Park (Quarry Bay Extension). Earlier this year, in winter (and on the second day of Chinese New Year), it was my turn to introduce a friend to a hike from Mount Parker Road to Hing Tung Estate that followed a similar route for at least the first two thirds of the way.

While the first hike was under a more bright blue sky and in clearer air, I think that the second hike was more enjoyable. One reason is that I now better know what to expect of hiking in Hong Kong. For another, it really is much cooler and less humid in January than July! And so much so that I know some Hong Kong hiking enthusiasts who won't go out on a hike at all once summer -- with its heat and, often, heavy rains to boot -- comes along... :S 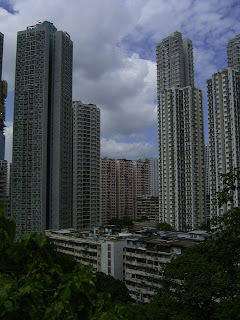 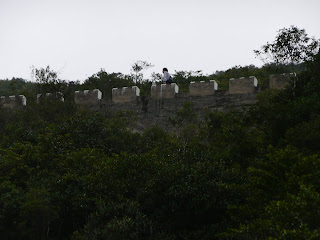 Above us for part of the way was what
my hike companion and I took to laughingly calling
the not-so-great wall of Hong Kong! 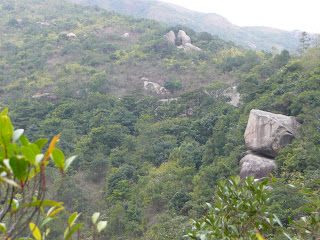 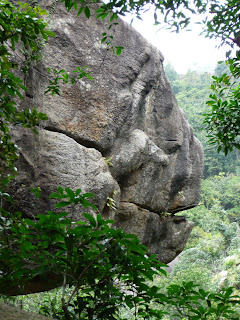 Doesn't this rock resemble the
face of some prehistoric creature? 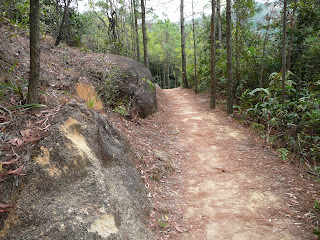 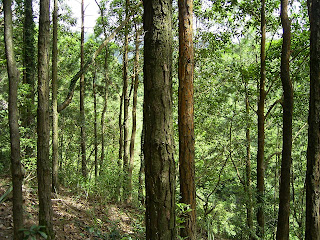 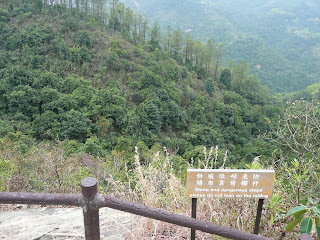 In contrast, before ending near Hing Tung Estate
above Sai Wan Ho, the 2009 trail took us by an area
that came complete with railing on one side and
a sign near it that read "Steep and dangerous slope
-- please do not lean on the railing"!
Posted by YTSL at 9:53 PM

Looks like a wonderful trail! I still can't believe that such greenery is within walking distance of Tai Koo and Sai Wan Ho, two MTR stops that I am very familiar with.

BTW, how long is the hike?

It's not a bad one. Very convenient to get to -- especially if you live on Hong Kong Island -- and quite easy to walk. So nice to do when one has a limited amount of time (or energy)!

I'd estimate that the hike takes about 3-4 hours tops, less if you don't do things like stop to admire the view and take photos like I'm inclined to. ;b