Chalk it down to it due to my being on the same continent as Beijing but try as I might, it seems like I can't avoid getting caught in the hype of the 2008 Olympics after all. And even though I wouldn't go so far as to say that I've been majorly gripped by Olympics fever, I've already ended up watching more of the Olympic Games coverage on television -- including not only the Opening Ceremony but also a few badminton and tennis matches, some gymnastics competitions and Yelena Isinbayeva's world record-breaking 5.05 meter pole vault -- than I thought I would.

In much the same way, while I don't think that the Beijing Olympics' fuwa are even half as cute as Hello Kitty, Dear Daniel, Winkipinki or the Totoros, I've belatedly realized -- as you will too post viewing this photo-essay -- that I've ended up taking quite a few photos of them along with other Olympics paraphenalia scattered about Hong Kong. (And if you didn't realize by now, not all of the 2008 Olympics' events are taking place in Beijing. Rather, the likes of Hong Kong as well as Shanghai and Tsingtao are among the other cities that are getting to host part of these sporting mega-event.) 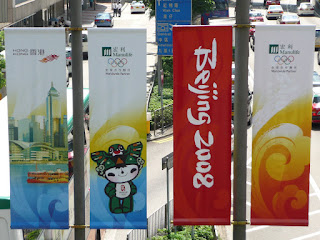 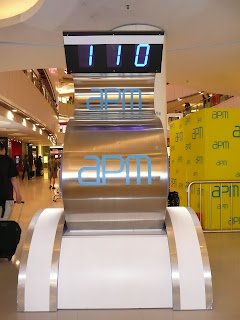 Walking through the apm mall in Kwun Tong,
I wondered aloud what this countdown clock
was counting to -- only to be informed that
it was for the Olympics, of course! ;b 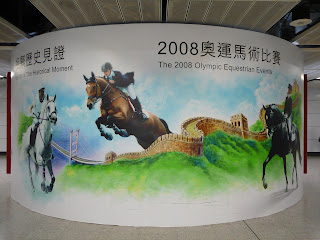 Inside Central MTR station is another countdown clock --
this one, as can be shown by its surrounding decorations,
more explicitly referencing the 2008 Olympics (and
the equestrian events for which Hong Kong is the venue) 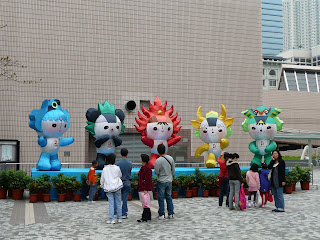 Fuwas on display outside the Hong Kong Cultural Centre 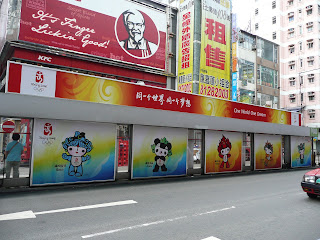 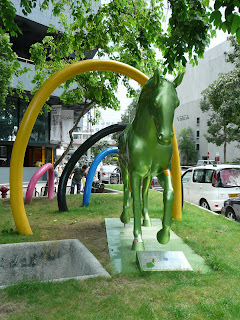 There are no signs to explicitly announce that
this outdoor sculpture by the Hong Kong Arts Centre
is Olympic in nature but the colours, rings and horse motif
gets one thinking of the Olympic Games all the same The Olympic Bridge in Causeway Bay
(which doesn't have space for mention
of the Olympics after Beijing's!) 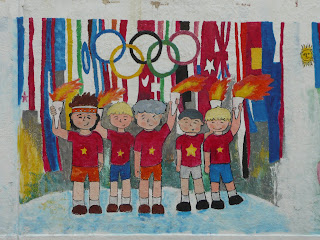 Weird as it may seem, I'm reassured to see that
not all of the Olympic visuals are polished looking
as well as commercial in nature :)

I've not watched as much of the Olympics as I used to as work has been horrendous.

But I did make time for diving which I've always enjoyed, a little football which I also rather like and of course for table tennis. =) Singapore's first medal of any colour in 48 years, so the semi-finals and the finals were a must and watching my country's flag hoist high at the medal ceremony was a definite must. =)

The table tennis women's team semi-finals made it so difficult for so many of us to work that afternoon. We had several of the televisions tuned to the game and and you could hear all kinds of reactions throughout the afternoon. When Feng Tianwei finally clinched a place in the finals for us, half the office leaped to their feet whooping for joy. I'm still not over Singapore winning the silver as you can probably tell. =)

Lee Chong Wei had a good run. Just wish that he had put up more of a fight in the final itself. So it's interesting to read your comments about being so happy that Singapore won a silver medal as, to be honest, I am a bit sad that Malaysia only had to settle for a medal of that color (as opposed to a gold)! ;b

A gold would have been fantastic but if you've watched as much table tennis as I have, you'll know that the China team we eventually lost to is very, very, very good.

If the team from China won that gold, which they did, it would make it the 33rd gold at the Beijing Olympics which would also mean that they would have surpassed their previous record of 32 golds at a single Olympics. I knew they wouldn't give that up easily. Most of us hoped that maybe Singapore could pull of an upset but we also knew that to do that would be near impossible.

Singapore's record at the Olympics is horrid. We've only one silver medal and it was 48 years ago. That was won by Tan How Liang in weightlifting. But technically, Singapore as an independent nation didn't even come into being till 1965 so this particular silver medal at the Beijing Olympics is Singapore's first post-independence medal, which is why it was such a big deal for us. So big a deal that the government actually postpone the telecast of the National Day Rally by a day so that we could watch the game. =)

I've watched Jing Junhong come agonisingly close 8 years ago and saw Li Jiawei come just as close 4 years ago. It's been a long, long wait and I'll take the silver over the bronze and definitely over nothing. =)

How is Malaysia's record at the games? Malaysia's got very good badminton players. You've got a fantastic squash player in Nicol David too but squash isn't an IOC sport yet unfortunately, if not I think Malaysia would have a very good shot at gold in Beijing.

Oh yes... apologies on calling Lee Chong Wei, Lee Wei Chong. I keep calling him that for some strange reason.

Shalom YTSL. So glad you came to visit and comment at Jerusalem Hills and that it led me to this, your fine blog.
I'll be back soon to read more.
Like your template. :)

This is very cool! Thanks for sharing. I LOVE the equestrian and only caught the jumping last Sat...sigh. And those stairs are too funny! Thanks for visiting too!

Malaysia's Olympic Games record is pretty dire too. If Lee Chong Wei had won against Lin Dan, he would have been the first ever Malaysian gold medalist. And yeah, the only Olympic medals we've ever won (silver and bronze) have been in badminton. And it is indeed a pity that squash is not an Olympic sport. Hard to understand really when it seems more of a legitimate sport than, say, beach volleyball!

Thanks for paying a return visit and planning to visit some more. And heheh re the blog template... I guess that great minds think alike, right? ;b

You're welcome re sharing and glad you enjoyed checking out this blog entry. :)

Indeed, I don't quite understand the inclusion of Beach Volleyball myself. There is already Volleyball but there is no space for Squash?

Ahhh... so Malaysia already has silvers and bronzes, a gold would have been nice. Too bad Lee Chong Wei wasn't able to pull it off.

We've still go the singles at Table Tennis but the women's World No.1, 2 and 3 are all from China and are all playing. And from the way they played during the team finals, they seem to be in top form. I'm hoping for upsets but am not counting on them. =)

Glad it's not just me that can't quite believe that beach volleyball is an Olympic sport but, say, squash isn't! :)

Malaysia won its first silver and bronze at the Atlanta Olympics. And yeah, I can see how it can be tough for Singapore to get another table tennis medal at these Olympics.

As for Malaysia: The last time I checked, we were still hoping for a medal in taekwondo but... Speaking of which: It's also a pity that wushu's not an Olympic sport... but, then, if it was, I guess China would be vacuuming up the golds in that sport too! ;S

I'm afraid I'm not really looking forward to the Games being in London. I feel such a kill-joy, but I can just imagine the hype that's going to start as soon as the current Games are over.

FWIW, I'm not a huge fan of the Olympic Games either. In fact, I really haven't watched that much of it compared to many other people I know -- and, indeed, it's only been while on holiday in Malaysia that I've done the bulk of my Olympic watching this time around. The Olympic decorations around Hong Kong, OTOH, I had slowly but surely been warming to. So much of it is cute in a Hello Kitty sorta way after all... ;)