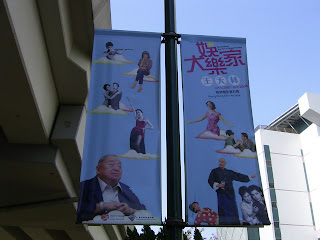 
Lest people think otherwise: Despite my job requiring me to do quite a bit of film viewing (and reviewing), the fact of the matter is that I've not given up on movie-going as a fun extra-curricular activity. Thus, this past weekend saw me head over to the Hong Kong Film Archive in Sai Wan Ho to catch a screening of The Wild, Wild Rose (1960) that was among the offerings of Entertainer: The Art of Wong Tin Lam (a film series that -- gripe, gripe -- would be so much cooler if only more of the featured offerings were shown with English subtitles).

In any event, and for those who are unfamiliar with this Hong Kong movie: The Wild, Wild Rose is a Cathay (aka MP&GI) film classic, one of many directed by Wong Tin Lam -- the 80-year-old father of Wong Jing who contemporary Hong Kong movie fans tend to best know as a frequent Milkyway Image character actor (cf. The Mission, Election 1 and 2) even though he officially retired some eight years ago.

It also happens to be superb showcase for singer-dancer-actress Grace Chang (aka Ge Lan) who may be a middle-aged Society matron these days but, back in the 1950s and 1960s, was one heck of a sizzling as well as major movie diva. For although its melodramatic components have not aged well, those sections of this film which place the spotlight squarely on Grace Chang the entertainer have most definitely stood the test of time.

After watching another of Grace Chang's signature movies, The Mambo Girl (1957), Brian (of HK Cinema: View from the Brooklyn Bridge, Subway Cinema, and Asian Cinema -- While On the Road) commented that:

I had previously seen pictures of Grace Chang – interesting face – sort of flat with a flared nose and a mouthful of teeth and a wide smile – but I would not have called her beautiful by any means. That’s because a still photo can’t begin to capture her immense charm, her myriad of lively expressions and her remarkably playful eyes that can enchant you one minute and devastate you the next. This is her film - she owns nearly every minute of it - and she creates a heartwarming portrait of youthful innocence that is astonishingly simple and yet completely captivating.

Well, as I told him in an e-mail written this past weekend, if only he could see Grace Chang on a big screen. Because even I, who previously had not been all that enamored by her when viewing her on a small screen (and this includes a viewing of Mambo Girl) was charmed, if not outright smitten post being privileged to have seen her visage projected onto a silver screen.

For that matter, so too was everyone in the Hong Kong Film Archive's cinema. As evidence: Whereas a lot of the viewers -- who tend to be chattier as well as significantly older than your average Hong Kong movie audience -- were prone to treat a lot of the rest of the movie like they were at a Chinese opera performance (in other words: they would pass comments among themselves about this and that that caught their attention!), every time Grace Chang appeared on screen, the whole cinema would get all hushed and fall noticeably silent.

All in all, it's been a while since I was among a movie audience that looked to love a film star so; with not only men openly lusting after her but also women appearing to wish they could be her -- or, at least, wishing that they could enthrall and capture men's hearts the way she could and did. To say the least, it really was quite the brilliant experience; and yet another memorable Hong Kong moment to savor for some time to come... :)

What an endearing enthused response to seeing this film. I long for the day I can watch Grace projected onto a large screen; you're so lucky. Thank you as well for the tip of the hat.

I saw this when it was shown at Lincoln Center in New York last month and I did a post on it for Mobius but I can't find that post anymore. But when I saw the film, it was projected on a Betacam videotape. Was your screening an actual 35mm film or a projected tape?

And, yeah, Grace Chang is quite something. She reminds me of old Hollywood stars. (And that's a GOOD thing.) And I found her work in this better than her work in BECAUSE OF HER, another early '60s musical she starred in.

Hi YTSL, I've just tagged you. Hope you can join the fun. Have a great day!

Thanks for coming over to take a look at my post and you're welcome re linking to your Grace Chang gush! :)

The screening I attended looked to be an actual 35 mm film but yeah, a lot of the Cathay movies in the Wong Tin Lam retrospective are being shown on projected tape. Have you checked out more of the Cathay stars yet? Up until this past weekend, others who I thought had quite a bit more charm and charisma than Grace Chang included Jeanette Lin Cui and Julie Yeh Feng!

Thanks for tagging me but, in fact, I've done this meme before. See:-
http://webs-of-significance.blogspot.com/2007/06/another-revelatory-post-and-meme.html

ahh... the Hong Kong Film Archive :)
can never forget my (short) visit there!

I thought all films in Hong Kong had to have English subtitles by law? Or is that no longer applicable in a post-handover Hong Kong?

I have Because of Her on the shelf but need to watch it.

How would you compare Grace Chang to someone like Linda Lin Dai? I enjoyed the Lin Dai films I've seen but couldn't quite see her appeal.

But, of course, I much prefer the later era musicals with Cheng Pei Pei and Lily Ho, anyway.

I think Linda Lin Dai was probably great for that era.

It's like watching Betty Grable or Mitzi Gaynor in some Hollywood musical -- not my favorite Hollywood Musical actress but still quite good.

And Wong Tin Lam is Wong Jing's father? I did not know that. I think I read that he had directed in the past.

So Cathay was a rival or precursor to the Shaw Studios? I know that eventually the Shaws ended up with talent from Cathay, right?

And both studios shot in Mandarin in that era, I'm guessing.

So when you see something like this in Hong Kong now, it's just in Mandarin with no Cantonese subtitles, let alone no English ones either?

Yes, the Hong Kong Film Archive truly is wonderful. Incidentally, a couple of other movies viewed there in recent months were "Project A" and "Homecoming". :)))

"I thought all films in Hong Kong had to have English subtitles by law?"

That law may only have come into effect after movies like "The Wild, Wild Rose"'s original release. In any event, noticed that in that work's case, there were no Chinese nor English subs on the print. Instead, there's this device at the HKFA that allows subs to be flashed on it UNDER the screen...

"How would you compare Grace Chang to someone like Linda Lin Dai?"

Lin Dai's fans will baulk but even before seeing Grace Chang on a big screen, I already preferred her to Lin Dai. One of the problems with Lin Dai for me is that she looked so much older than her real or cinematic age in the movies I've seen her in. Also, she made so many melodramas which haven't aged well -- so, all in all, it's probably not coincidental that my favorite Lin Dai role was in the romantic comedic "Cinderella and Her Little Angels".

"So Cathay was a rival or precursor to the Shaw Studios?"

Rival. Other bits of trivia: Cathay has Malaysian roots -- and even though it's now headquartered in Singapore, it still runs a chain of cinemas in Malaysia. The Shaw Brothers also has Malaysian and Singaporean connections, past and present.

"And both studios shot in Mandarin in that era, I'm guessing."

You guessed right there! :)

Cathay has a museum of sorts in their Cathay building in Singapore which had reopened. :)

Care to tell more about the Cathay museum (if not on your blog then on this thread)??