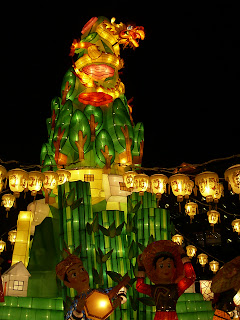 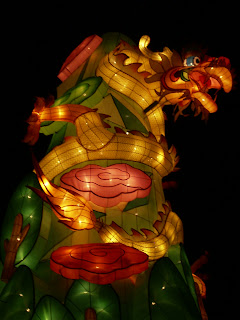 Close-up shot of the glowing dragon
at the top of that mega lantern structure
Advance warning: Firstly, that this is going to be a more personal post than the ones I've been writing lately. Furthermore, that this is going to be a rather schizophrenic post. I.e., the two photos bear testimony to it being written on the night of what's variously known to -- and celebrated by -- the Chinese as the Lantern, Mooncake and Mid-Autumn Festival. Also, my decision to include a dragon into the picture(s) partly stems from last night, tonight and tomorrow night also seeing the commemoration of a Fire Dragon Festival that I spent part of yesterday evening checking out.

At the same time, my main reason for posting this evening is to commemorate the fact that I've turned 40 (yes: forty!) today -- and to mark this occasion by taking some time to reflect a bit and recall where I was, and what I was up to (or felt), on a few of my more notable birthdays. (And, in the process, give some more evidence for how itinerant and international my life thus far has been...)

E.g., my 10th birthday was spent in England -- and strange as it may seem, my abiding memories of that day include watching a TV special about a then yet-to-be released (in the U.K., if not the U.S.A.) sci-fi movie entitled Star Wars, being taken to Brands Hatch to watch a Grand Prix (and while there, having my first crepe!), and being presented with a birthday cake that contained copious amounts of two of my favorite fruits (strawberries and bananas!) at a birthday party held in the back garden of the house in Beckenham, Kent that I was staying in at the time!

In contrast, my 16th birthday was spent back in my family home in Penang, Malaysia. Even more surreally, the only thing I remember about this birthday was waking up to see my father gazing at me amusedly and then asking a still not-completely-awake me: "So, how does it feel to be sweet sixteen?" And my feeling rather insulted by the idea that I, in my 16th year or at any other time, might be considered "sweet"! ;D

Then it was back to England for my 18th birthday. For some reason, I can't remember the exact details but I was probably at (boarding) school in Wellingborough, Northamptonshire on the day itself. On the other hand, remember well that the weekend saw the then budding foodie in London and getting taken out to a nice restaurant as a birthday treat by a family friend with whom I've since, unfortunately, lost touch. (To Mrs. Shelley Moore: if you somehow ever stumble across this blog, hope you're keeping well and thanks for the memories!)

The next year saw me celebrating my 19th birthday in Beloit, Wisconsin. The best memories of the day include the women's soccer (association football) team I was a part of at college beating the University of Chicago's women's varsity team by 4 goals to 1. And, after the game ended and the news somehow was conveyed to the people present in Strong Stadium, everyone proceeding to sing "Happy Birthday" to me!!! :)))

My landmark 21st birthday also was spent at Beloit. Strangely, however, it really wasn't as memorable as that which occured two years before! Instead, all I remember was feeling some regret that I was now a bona fide adult, yet still felt more like a gangly girl than grown woman... ;S

Now we fast forward to birthday number 30. Spent in Philadelphia -- and taking place in the wake of one of the most disastrous episodes of my eventful but still young life. Have to say that in contrast to just nine years earlier, I really felt -- if not old, then scarred and weary. And even if it's not taken me a lifetime to recover from what felt like a living nightmare for quite a while there, it has taken me more years than I would like... :S

Anyways, that's now in the past (thank goodness!), and here I am celebrating birthday number 40. If truth be told, it's not been very festive thus far; not least because it's the first birthday in years on which I had to work! At the same time, have to say that I'm not feeling as traumatized as I thought I would be upon hitting the big 4-0. (Not yet, anyways!) So, hey, surely that's something to celebrate? Oh, and the fact that I got/get to spend it as an official resident of Hong Kong, of course! :)

Thanks for sharing your personal reminiscences. The soccer/football game story is wonderful. I can see why that one would stand out in your memory.

I'm glad that you've recovered from whatever event it was that left you feeling scarred for your 30th birthday. (Did I miss what it was somewhere? I figured that you were intentionally vague.)

My own 21st birthday was completely unremarkable, too. I don't even remember it. When I turned 30, though, I threw myself a party. I hope I'll have a party for 40 too. (I have a few years yet, though. To plan.)

I hope that you've had an enjoyable day, and celebrated with friends. And perhaps some good food and beer.

Have a wonderful birthday, working or not! Forty is nothing, believe me;)

You have remarkable recall of your significant birthdays. One of the few I do remember is in fact my 40th, because friends and my husband conspired to take me out for a surprise meal at a very special restaurant. The difficulty was for them to get me to dress accordingly, for what I thought was no apparent reason. There was nearly a great falling out!

Thanks for the birthday wishes. Also, about seeing those fine lines: In all honesty, am not worrying about such. Rather, I just wish that at 40, I didn't have to worry about having pimples -- like I feel obliged to admit that I (still) do! ;D

Re the nightmare event that occured before my 30th birthday: Yeah, I was intentionally vague about it. All in all, it's too surreal to share with most people -- and hopefully, it can be generally consigned to the past instead.

As for my 40th birthday: Had some very good food and a carafe of delicious sake at dinner. Must admit though that I did my socializing and combined moon and b-day cake eating the day before rather than on d day itself! ;)

Thanks for sharing your 40th birthday story. It made me laugh for sure! :)

Heartfelt congratulations on your turning a new page on an already quite eventful life, and those colours in the photos come out so beatifully, it makes me regret that I missed it all by a few days.

I do recall quipping at someone who was understandably rather awed at the prospect of turning thirty (I'd already passed that point by a year or two then) to the effect that "Don't worry, it doesn't hurt" ;). I'd assuredlly attest to the same in yet milder form regarding forty, from experience :).

Turning 40 is not as terrifying as turning 30, I think.

My 20th birthday ushered in a weird and sometimes bad year in 1987.

But, I have fond memories of turning 10 and 30 if that makes up for that.

Star Wars figures proiminently in each: about to come out in May 1977 in the States (although I was more concerned about Ray Harryhausen's work in the soon-be-released Sinbad and the Eye of the Tiger at the time) and then in spring 1997 the re-release of the so-called Special Editions that Lucas had tampered/tinkered with.

And hey, Cecilia Cheung is back on stage so all is right with the world as far as I'm concerned! LOL.

Thanks for the heartfelt congratulations. As for your lantern festival regrets: What, you were in Hong Kong too at some point this month???

March 4, eh? Interesting since I know of at least two other people who share that birthday!

Also, what's this re Cecilia Cheung being back on stage? Seems you're more 'up' on HK entertainment news than moi!!! ;b

Here's the link about Cecilia.

I am not a big fan of her singing but I do honestly think she is a good actress when she is given decent material -- Failan, Twelve Nights, Everyday is Valentine maybe.

It's only about a two hour flight, Yvonne, as you would well know -- the intervals may vary, but I am around from time to time. To be honest, Hong Kong is one of the places I instinctively liked right away, for whatever reason. Alas I had to leave on the 24th, after a four night, five day visit, but the inner geek (audio equipment, anyone?) and the inner glutton (pretty obvious to anyone not severely gastronomically challenged, one would think) must have had some field days, to say the least ;).

You know, Glenn, don't you get the certain feeling that our generation (I was September 1964, hopefully not too far removed) grew up with the Star Wars series, in some sort of way? I've always felt so.

And good to know that Cecilia Cheung is not completely retired -- personally, in agreement, albeit as an uninformed, totally non-expert opinion -- I'd hoped that she might possibly be headed in an Maggie Cheung direction, so to say, as in perceived teenybopper to recognised serious actress sense.

Is it only two hours? Have never flown between Hong Kong and Bangkok! OTOH, definitely share your liking for Hong Kong and recognition that it is a pretty good place for the geek and glutton... ;D

As for Cecilia Cheung: She may such a wonderful debut with "King of Comedy" but have to say that most everything since has been not that impressive to me. Having said that, I really do like "Lost in Time" and "One Nite in Mongkok" -- but think it's more of account of those films' lead actors and director.

On a good day, BKK - HKG might be around two hours actual flying time, and it does tend to be faster going east, as in most cases (bad day, more like two and a half, I'd reckon -- overall, rather quicker than airline timetables would suggest, perhaps, but when do you think employers start paying extra for overtime work?). Longitude-wise, Penang, for instance, would hardly differ by much from Bangkok, but latitude-wise, it is a bit further south, needless to say.

As it turned out, yet more geekery (?) and gluttony is on its way soon, get back to you on that, if perhaps not here...

Ah, Derek Yee, Lau Ching Wan, and not just a pretty face Daniel Wu... Yes, I think I see what you mean, within my limits. Which is also why I thought "Protege" was a bit of a disappointment, though not at all unenjoyable :).

Indeed re dear Daniel not being just a pretty face... though, yes, he is quite the looker, that fella! ;b

And yes, agree with your assessment of "Protege". In fact, I'd go all the way and say that I found it the most disappointing Derek Yee movie I've seen -- though,hmmmm, "Drink, Drank, Drunk" wasn't great either. *But* that had the great Alex Fong. So... :)))))

Thanks, and have to say that it wasn't a great 40th birthday on the actual day itself but this wonderful long weekend has made up for it. :)