Wuhan coronavirus updates and discussion, including about conspiracy theories about it 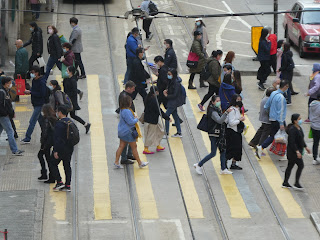 Spot the non-mask wearers in the crowd...

Masks, hand sanitizers and other essentials in these
medically trying times are back in stock in Hong Kong
(albeit at painfully inflated prices in some instances) 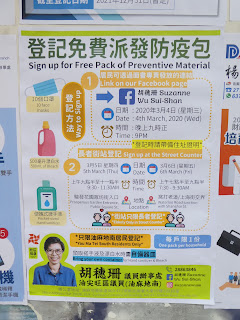 Hong Kong reported its third Wuhan coronavirus fatality last night and news came earlier today that the territory now has 115 confirmed cases of infection by this deadly virus that is spreading like wild fire the world over.  For context: Just two days after I posted that the number of confirmed novel coronavirus cases worldwide having passed the 100,000 mark, the number of people confirmed to have been infected by the Wuhan coronavirus now exceeds 110,000.

Within just 24 hours, the number of reported fatalities in Italy rose almost three fold from 133 to 366, and that same Sunday, the number of confirmed cases of infection in that Western European country went up by a single-day record of 1,492 to 7,375.  For a while, it was the country with the most Wuhan coronavirus cases outside of Mainland China (whose official numbers have its total cases of infection as a whopping 80,735; with more than 3,000 people dead, some 58,600 having recovered and some 19,000 still undergoing treatment); until South Korea returned to that position today with 96 new cases of infection, bringing its total to 7,478.

Italy's prominent position in the Wuhan coronavirus infection table (and the top ten currently also including France, Germany, Spain and the USA) should lay to rest the assumption -- seemingly held for quite a time by a good many people -- that the coronavirus was "only" infecting and killing people in East Asia, people of East Asian descent or both.  Or, even more specifically, people of Chinese descent.  (Which is one reason, I suspect, for many -- though not all (with notable exceptions including the great Hong Kong Hermit) -- Westerners in Hong Kong refusing to wear masks, unlike the vast majority of the territory's populace.)

As virologist Ian M Mackay lamented in a Tweet back on February 16th: "Why is it hard to understand that a virus emerging in one country means *that* country has the majority of illness & death until it the virus has spread worldwide. Once it has spread, all countries will have illness and death. The receptor for SARS-CoV-2 [yet another name for the Wuhan coronavirus] is common among *humans*".


On a -- I suspect -- not unrelated note: it's only in the past week or so -- around the time that the deadly virus spread in earnest to Europe -- that I've finally seen posts about the Wuhan coronavirus from Facebook friends who live outside of Asia.  Even then, only a handful are actually serious, with more being jokey in nature.  I, on the other hand, have been posting about it -- both on Facebook and on this blog -- since early January, and never to make people laugh.

Even more disturbing than people not taking the Wuhan coronavirus threats seriously are those who believe and help perpetuate the conspiracy theories concerning it.  Early on, I was sent "information" by well-meaning friends (including one with a Ph.D. in medical anthropology!) about the deadly virus having been a bioweapon which escaped from a lab in Wuhan.  More recently (including as late as earlier today), I've been seeing posts by Facebook friends (e.g., a former college mate) about all the talk about the Wuhan coronavirus being a serious threat is just to get people in the USA to panic and change their vote in the upcoming Presidential Elections.

Frankly, about the only Wuhan coronavirus conspiracy theory I believe involves why a number of Western experts and governments are telling people that mask-wearing is not an effective deterrent against the coronavirus but, also, that masks should be reserved for medical staff.  As an Australian member of the Twitterverse noted, "I think it's increasingly obvious that the reason health authorities in, for eg, Australia and the US are discouraging mask use is that they don't have enough supply for medical staff. The "it's not effective" line is pretty transparent bullshit."

Or as Hong Kong pro-democracy politician and social worker Lo Kin-hei observed (also in a couple of Tweets that I'm hereby translating into regular English): ""No masks until you have symptoms"-type people trust both the medical experts and the functionality of masks. But as Coronavirus is contagious even when an infected individual is asymptomatic, an "all people masked" policy would seem to be an effective way to cut the infection chain".  After all, "If you believe that sick people should wear masks and masks stop diseases from spreading to other people, and if you agree that the coronavirus is contagious with no symptoms and you can be sick without you knowing it, then you should also agree it's good for everyone to wear mask, and it's perfectly scientific to think this"!
Posted by YTSL at 11:09 PM

All good points! It's appalling how ignorant and easily misled folks are, particularly in times of stress and crisis. It seems all the hidden (and not-so-hidden) biases, fears, and other forms of confusion rise to the surface during such times. Rumours just add fuel to the fire. I appreciate your journalistic efforts in the meantime!

Thanks much for your kind words -- and, almost needless to say, I'm glad you find the points I made to make sense! :)

Oh dear. They finally call it a pandemic. And now celebraties\politicians are tested positive. Local streets are getting more crowded now that more people are going back to work. Despite there had been non-stop working in the past weeks where job nature of a Helpdesk prevented us service providers from backing down, I just feel helpless.

The anxiety is having its high and low. Needs lots of distractions to keep ourselves sane. Glad I still have my novels and Bach music for such matter.

Sorry to hear that you've been having to work non-stop the past weeks. Hope you get a breather some time (this weekend maybe?). I've been reading quite a bit too -- both online and offline stuff. Listening to Bach not so much... ;S

I actually stayed in Cheung Sha, Lantau last night. One of my younger sisters won a ballot of her company's holiday house (really a local village house in Cheung Sha). Got the elder folks there too. The gataway was just about 24 hours starting for lucch in Mui Wo (The Turkish restaurant, very nice).

I still received a service call last night from a BIG customer but that couldn't be helped. Not bad for the 24 hours except for some grumpy old dad moments. Oh, I walked around the beach yesterday afternoon and got an close encounter with a tame water buffalo there. We were going towards each other and he just walked past me at leasure less then 20 cm away.

The only drawback is the noise of some open-air restaurants nearby with someone partying into the late night. Lots of birds and butterflies.

It sounds like you had a good, even if short and not completely free-of-work, break this weekend. I've had a number of post-hike meals at Bahce. It's often a toss up between it and Wah Kee for my hike buddies and I (though the China Beach Club's apple crumble gets my vote for best dessert in the village)!

I also ate at The Stoep when it was still located in Cheung Sha. To be honest though, it didn't excite me. So I haven't gone and eaten at its new location in Mui Wo.

Despite the sunshine during the day, it's a pity the sky was overcasted after dark or we may have the chance to see some stars.

It's so rare to see stars in Hong Kong. Far less rare to see interesting wildlife! I went out hiking this afternoon. Spotted lots of butterflies, dragonflies and interesting birds. The last even obliged me by staying still long enough for me to take photos of them! Was very pleased as, usually, I hear them much more than I get clear views of them. :)

Cheung Sha's beach is dark enough to see stars if one is well away from the street lights. The house we were in is right in front of a street light, but the roof is sheltered from the lights around. It's just the overcast had ruined it. I guess I am old enough to remember that one can see brighter stars and some constallations in Victoria Park, when the light pollution was not so severe four decades ago.

Wow re your being old enough to remember seeing stars in Victoria Park. For my part, I've only ever seen stars in the Hong Kong sky in places like Tai Tam Tuk though, to be fair, I've at least been able to see the full moon in Victoria Park... ;b