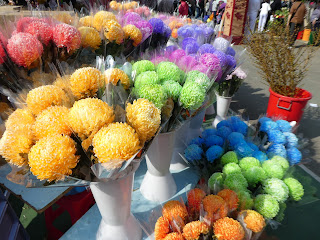 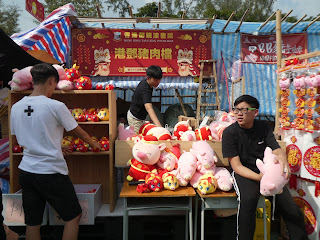 The abundance of pig plushies tells you what zodiac year's coming up! 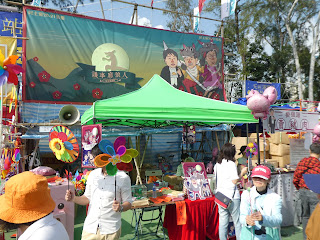 And the topical political displays let you know what's on the mind of
many Hong Kongers even as the most festive time of the year approaches...
In just a few hours, it'll be Chinese New Year.  I've spent a good part of today cleaning up my apartment, and also spent some time today and yesterday shopping for food (even though I actually know that at least a couple of the supermarkets I shop at will be open every day of Chinese New Year this year).  And earlier still (on its opening day, in fact), I paid a visit to the Chinese New Year flower market in Victoria Park to check out what was on offer there this year.
Entering from the Tin Hau side of Victoria Park, the first stalls I came across were those selling food and drinks.  Because it was so unseasonably warm when I went, I actually wasn't all that attracted to what I saw on sale -- a large percentage of which was "stick food", be it Hong Kong curry fish balls, Xinjiang lamb skewers or Japanese king crab sticks.  And it didn't help that there was a stall sending stinky tofu whose distinct -- and, to my mind, seriously smelly -- aroma could be detected several meters away!
Actually, one of my abiding memories of this year's Chinese New Year flower market may well be the strong aromas that wafted about the place; with there actually be two stalls hawking durian -- yes, really! -- and at least one selling kimchi located not in the designated food stall area but among those hawking pig plushies, pig-shaped balloons and the like!  And for the record: despite my actually loving to eat (Malaysian) durian quite a bit, I declined the opportunity to do so in Victoria Park; this not least because I have a feeling that the prices being asked (t)here for the king of fruits would be on the princely side!
While I walked quickly by the durian and kimchi stalls, I did linger in the section of the Chinese New Year flower market set aside for the sale of the titular blooms.  And while it's true enough that I never do buy any flowers at this festive fair (or, for that matter, the Hong Kong Flower Show that's also held each year in Victoria Park), I do like the sight of the many beautiful and colorful flowers set in row upon row next to one another or similarly auspicious plants that are particularly sought after at this time of the year, such as the "lucky bamboo" and orange trees.
What I did come away from my visit to this year's Chinese New Year flower market with were a pair of Totoro-themed bedroom slippers and, as has become a customary practice for me since the Umbrella Movement came into being in late 2014, an item purchased at a stall operated by a political party that's part of the pan-democracy camp.
While we're on the subject: this time last year, I got the sense that many people sought to steer clear of the overtly political-themed booths but this year, support for those associated with the Umbrella Movement looks to be up again.  At the very least, I personally observed a matronly woman walk up to the Demosisto stall and drop a HK$500 note into a donation box without anyone approaching her to do so.  And that action makes up one of my abiding memories of this year's Chinese New Year flower market -- along with the strong afternoon heat and strong smell of stinky tofu encountered in Victoria Park that day!
Posted by YTSL at 10:47 PM

It seems you are not particularly fond of durian. That surprised me.

Er... here's an old post of mine that should get you realizing that I do love durian!

At the same time though, it's also true that I think there are places where durian should not be due to their strong aroma -- which Hong Kongers don't seem to mind or may even notice as much as Malaysians. Hence Hong Kongers often having durian in the kind of places most Malaysians would never dream to put or take them -- e.g., air-conditioned buses and also super crowded places!