Haenyeo hard at work in the waters off Seopjikoji (Photo-essay)

Remember the haenyeo I wrote about a few posts ago?  I have to admit that after watching their performance in the cove that lies in the shadow of Seongsan Ilchulbong, I was moved to think that the legendary sea women of Jeju had been reduced to being more of a tourist attraction than a (still) seriously active community of working divers.

After encountering an actual working group of haenyeo the next day at nearby Seopjikoji, however, I got to radically changing my opinion about them -- and being inclined to look about this celebrated traditional community with far more respect, admiration and awe.  For not only were these women going about their business without much hype or hoopla but they went far further away from shore and very noticeably into deeper waters than the ones who had put on what, in comparison, really had been a show at the cove the previous day... 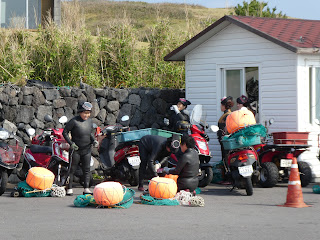 It seems that many -- if not all of -- the haenyeo get to
their assembly point by the sea via motorscooters! 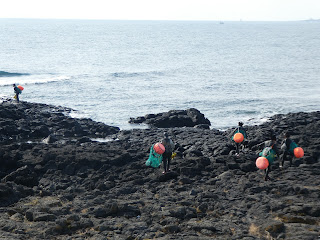 From there, it's a short walk over black volcanic rocks to the sea 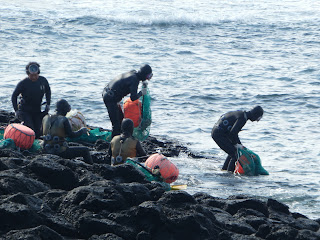 For much of the year, the waters off Jeju probably are
cold enough for wetsuits to be a welcome costume option 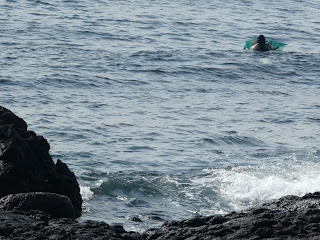 Even so, I reckon it takes quite the effort to voluntarily
go into the water and far away from shore... 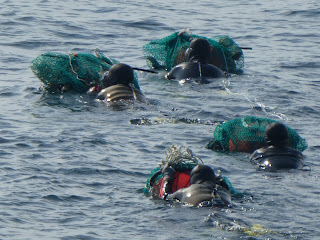 ...which may be one reason why I saw that the haenyeo
tend to do so in groups rather than solo :S See what I mean about this group of haenyeo having gone
further away from the shore than the previous day's group? 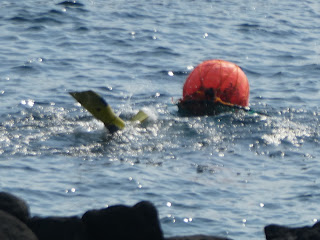 Yes, these are divers, not "just" swimmers... 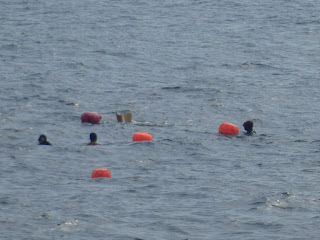 It's also worth pointing out that some three hours
after I saw them go into the water, they still were
working away far away from shore... :O
Posted by YTSL at 9:46 PM

Seeing these women in their actual workplace was one of the highlights of this trip.

I'm glad we -- especially you! -- got to see the haenyeo in action at Seopjikoji. :)

This is such an authentic non-touristy portrait of these stalwart women of the sea.

Seeing them like this gets one admiring and respecting Jeju's haenyeo even more, right? :)

Rereading your post again. The haenyeo must have finished their day already when we arrived around 16:00. We did manage to see a group of haenyeo on the rocky beach next to Ilchulbong though. Watching them emerge from the ocean forever changed my appreciation for the abalone.

Yeah, my party were in Seopjikoji earlier in the day than you. Glad you managed to catch sight of the haenyeo in action in the vicinity of Seongsan Illchulbong though. These are amazing women...

And your mention of the abalone in Jeju makes me pine for the food there once more!