Much to see at Sangumburi beyond its enormous and rare type of crater! (Photo-essay)

At the risk of stating the obvious, it's not every day that I get to view a crater.  But on the same day that I hiked up to the top of Seongsan Ilchulbong (and got to see its circa 600 meter crater that's among its recognizable volcanic features as well as the sunrise), I also ended up going to view a second crater: the even larger (with a circumference of over two kilometers) Sangumburi (Crater Mountain)!

A rare kind of geologic phenomenon known as a parasitic marr or low-relief crater, Sangumburi also is famed for having a photogenic expanse of silver grass (aka pampas grass) in the fall.  To be honest, its main attraction for my group (which included two senior citizens) was that its many sights are easily accessible as well as genuinely scenic.  Mind you, we didn't go down into the crater -- but, then, no one is allowed to do so as the sunken space is akin to a natural botanical garden, full of flora and fauna allowed to flourish undisturbed by humans for the most part.  But with so much to see in the area, this restriction really didn't feel like too much of a deprivation. :) 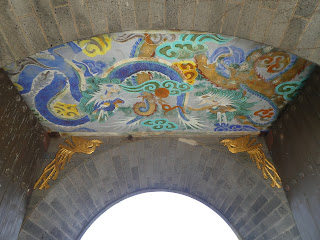 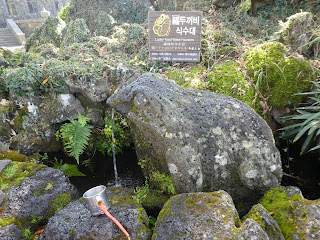 I drank water from the Lucky Toad Water Fountain
(and survived to tell the tale!) 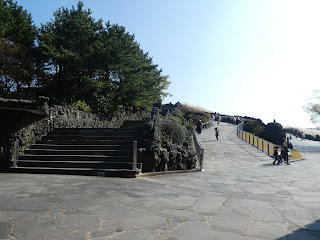 Three different routes leading up to the crater rim 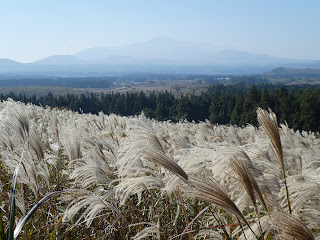 Take the route on the right and you will find yourself
surrounded at some point by a sea of silver grass
(and with a view of Hallasan in the far distance)! 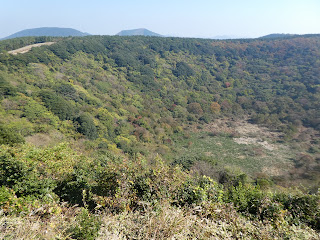 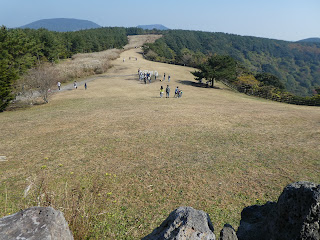 The side of the crater rim laid out as a 1.2 kilometer-long
"Korean Fir Trail Healing Course" 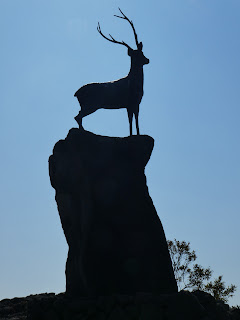 A statue of a deer stands as tribute to the area's wildlife,
and also Hangam, the guardian of Jeju's animals and hunters,
who is said to reside at Sangumburi 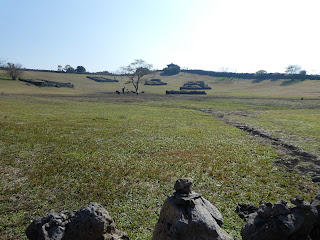 Also within a stone's throw of the crater are ancient graves,
whose occupants' identities appear to have been lost to time
Posted by YTSL at 11:08 PM

All your Jeju entries so far have been alive with geologic wonder. The Lucky Toad Water Fountain looks so peaceful, as do the Fir Trail Healing Course and your "Ancient Graves" which you so well describe, "Whose occupants' identities appear to have been lost to time."

I hope you saw the island sculptures known as "Grandfather Stones."

I saw a number of "Grandfather Stones" about in Jeju but am not certain that I actually saw an actual ancient one. Was waiting to do so and take a picture of an authentic ancient "Grandfather Stone" and ended up with no photos of these stones, new or old!

And while we're on the subject of grandparental figures: When looking at my photo of the Fir Trail Healing Course, you should try to imagine the excited screeches of young children -- often being overseen by a grandparent rather than parent -- running up and down its gentle incline... ;)