One more 2011 HKIFF report (the Devils on the Doorstep edition) 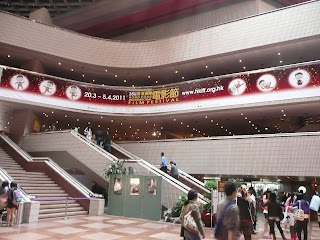 Scene inside the Hong Kong Cultural Centre --
my favorite of the HKIFF venues due to its Grand Theatre
having by far the largest screen of the fest
As I write this blog entry, the most recent Nobel Peace Prize winner and a famous artist-activist who served as the artistic consultant for the Beijing stadium popularly known as the Bird's Nest are being held against their will by the Mainland Chinese authorities. Some of you might query why am I writing about this in a Hong Kong International Film Festival report.

One of my reasons is that Liu Xiaobo and Ai Weiwei are both fellow countrymen of Jiang Wen, the director and star of the film that is the main subject of this blog post. Another is to make clear that the on-going attempts to silence Ai and Liu are not new -- and to note that, for making Devils of the Doorstep, Jiang Wen was effectively banned from directing films for seven years. (Though no official declaration was made about this, the record shows that Jiang did not direct a film between the 2000 Cannes Film Festival Grand Prix winner and 2007's The Sun Also Rises.)

In recent months, however, Jiang Wen's latest directorial effort, Let the Bullets Fly has emerged as Mainland China's biggest ever box office hit. And I hope that in years to come, Liu and Ai will be able to emerge from the metaphorical ashes like the mythical phoenix, this son of Tangshan, and the city which has been able to rebuild and revive in the years and decades after a devastating earthquake lay waste to much of it.

You might not expect it of a 2000 Mainland Chinese movie but Devils on the Doorstep eschews color for the greater part of it. Even more surprising though is how devilishly quickly a lot of the dialogue in this more than 2 1/2 hour long film actually is delivered. But suffice to say that these are just two elements of this period work set during the tail end of the Japanese occupation of China that seem geared towards disorientating and shocking its viewers.

Beginning with a scene showing a Japanese military unit marching jauntily along on a country road as its band blares out a lively tune that gets played several times in the film, the work's protagonist is first shown in the middle of having sex before loud knocks on his door gets him out of bed and into a right mess: one involving the hapless villager being handed the considerable responsibility of looking after a Japanese soldier and his Chinese interpreter until their captors return to collect them.

As a man of his society and station logically would do, he quickly informs several of his fellow villagers about this development -- and also tells them that all of their welfare is now tied to the welfare of the two captives. Feeling obliged to keep those two prisoners sound as well as safe, the villagers feed them and generally look after their needs (bar, of course, for their need to escape and be free). And as the days that the captives spend in the village turn into months, they begin to slowly but surely come to the way of thinking that maybe there are worse fates than to be held by those reluctant captors after all...

Containing elements of black comedy, outright farce, suspense, action, intrigue, drama and tragedy, Devils of the Doorstep is neither an easy film to categorize nor characterize. Seeing as it also alternate shows both the Chinese and the Japanese at the best and their worst, it additionally is too complex to simply describe as anti- or pro-Japanese (though it may be true to state that it paints a surprisingly critical and/or caricatured portrait of Chinese villagers than one would expect from a Mainland Chinese film).

At the same time, my feeling is that it is a close-to-maniacal (in terms of mood swings but also plot trajectory and overall pacing) movie that successfully shows up the many absurdities along with absolute volatility of war time life and attendant insanity that comes from viewing other people as devils rather than fellow humans because of ethnic and political dictates.

In addition, running through much of Devils on the Doorstep are the twinned ideas that fear often paralyzes and caution often causes people to make the practically incorrect as well as morally wrong decisions. And although the offering's conclusion might be interpreted by some as showing that freedom from fear may lead to reckless acts and premature death, it actually seems to me that the film's message actually is that even if your dread-free actions bring punishment upon you, at least you'll die more satisfied and happy than if you had continued to live a life over-burdened by sometimes justified -- but other times needless -- terror and worry.

Thanks for the reminder about this film. I saw it years ago when I was almost exclusively catching up on Hong Kong film and truly enjoyed it. If I recall correctly I hadn't seen anything but melodrama and/or wuxia from China. The humor took me by surprise and led me to seek out more Chinese film.

The artist community here, at least the ones I am friends with on facebook have taken up the cause of Ai. Sadly I think most people have already forgotten about Liu.

Thanks for sharing re "Devils on the Doorstep": I can just imagine it taking you by surprise given the circumnstance that you viewed it in! BTW, have you seen Jiang Wen's "Let the Bullets Fly"? If so, would be interested in getting your thoughts re the film.

Interesting thoughts too re Ai and Liu. And it's sad indeed if most people (in the West and elsewhere) have already forgotten about Liu.

Perhaps I am not the best indicator on what is remembered and forgotten because I don't watch the news as much as I should or read a newspaper regularly. Let's hope I am wrong.

As for "Let the Bullets Fly," no I haven't seen it yet. I was very excited to see it was going to be playing at the Tribeca Film Festival until I found out I was going to be out of town for every showing. :( Looks like I am going to have to get it on dvd.

Okay, in terms of who's remembered vs not, let's indeed hope that you're wrong... ;b

As for "Let the Bullets Fly": be sure to report back after you've viewed it, okay? :)