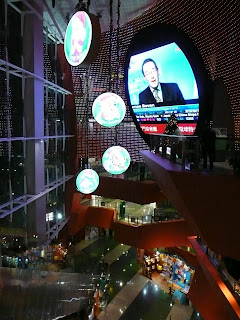 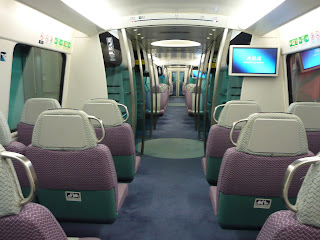 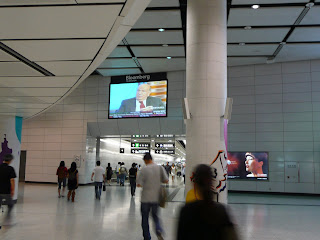 In recent weeks, I've played host to visitors from Chicago, Vancouver and San Francisco -- none of whom I took hiking but, instead, had dinner and spend time with in the lively, pulsating urban Hong Kong hubs that are Central and Causeway Bay. Listening to their impressions of Asia's World City reminded me how surrounded by technology as well as fast-paced life often is here.

As an example, everyone's noticed that Hong Kong escalators looked to have been programmed to move faster than the rest of the world's! Gone unmentioned though, I guess because it's so super obvious, is how escalators are such a common and ubiquitous part of the Hong Kong urban landscape.

And, come to also think about it, video screens in public areas. Indeed, it was only when hunting in my photo archive for this week's Photo Hunt that I noticed that, with none of them having been the central intended subject, I nonetheless have quite a few photos of public areas where video screens prominently figure.

For the record, the photos above are taken inside (from top down):-
the enormous -- and yes, box-shaped -- Mega Box shopping mall in Kowloon Bay; an Airport Express train carriage (that, incidentally, also has wi-fi); and one of the tunnels connecting the MTR's Hong Kong and Central stations.

(And speaking of the MTR, I have to say that hardly a day goes by without my not being grateful for Hong Kong have great public transportation systems and technology! ;b)

Great take on the theme. I'm not used to seeing video screens in public areas where I live. That's interesting to learn that about Hong Kong. Happy weekend.

Hmm you have a very good choice for this theme. HAppy weekend and hunting too.

wow! that is an exciting array of technology you displayed! i'm afraid i'm not too savvy with regard to gadgets but those goodies are just too dazzling to ignore =]

Those are all great evidences of technology!

i think i made a fool of myself this week with cows n lorries n technology :)

I think we all imagine that Hong Kong is filled with modern technology nowadays and you are proving it.
Happy weekend YTSL.

i am always amazed at HK's efficiency. and i'm sure technology has helped in so many ways.

Hong Kong is one of the places I would like to visit, one day...

A really nice take on the theme. We don't have many big screens like that... Your trains looks a lot nicer than the London Underground! Have a great weekend

FWIW, apart from Hong Kong, about the only places where I've seen many video screens in public areas is Japan, South Korea, Singapore and New York. :)

Thanks and happy weekend and hunting to you too. :)

Don't worry. I hardly think of myself as technology expert too -- so you're not alone in that regard! :)

Well... you went for the simple while some of us went for higher tech, is all... ;b

I think there actually are some people who still think of Hong Kong as a sleepy as well as exotic third world place. But yeah, I imagine they are in the minority these days... ;b

Hope you make it here some day and when you do, you will enjoy your visit. :)

Yes, the MTR does seem to have the London underground beat in terms of aesthetics and general comfort. ;b

I always viewed hongkong as Asia's most advanced city when it comes to tech!!! :D

We really can't live without technology, technology is everywhere! Enjoy your weekend.

Actually, I'm not sure about that... instead, I think I'd award that title to Tokyo!

Humans -- the technical animal? ;b

Living in a modern city, it's inevitable to have such technology around us. Can't live without it. :)

The airplanes I took lately are becoming smaller and smaller because they pack a maximum of people in there ! it's awful you are like sardines in a box !

You mean to say that Hong Kong escalators are faster than New York's?! Impossible!! ;) How can it be? Haven't you ever heard of a New York minute? :D

Great post, as usual. I enjoy seeing your end of the world every weekend. Thanks for visiting my Photo Hunt today. Have a great weekend.

You mean video screens? Actually, I can't imagine European cities being so fond of huge video screens in public -- figure they may strike people as too Big Brotherish! (European visitors -- can you verify this? Haven't visited Europe in ages!)

Er... did your comment come out of seeing the Airport Express photo? In any case, I know what you mean but for me with a bad back, the worse thing is how the seats can't recline much and seem so hard!

Yes, believe it, escalators in Hong Kong are faster than those in New York! :D

And to give you an idea of how fast-paced Hong Kongers want life to be...
http://webs-of-significance.blogspot.com/2008/08/relax.html

It is so cool to see all the different takes on this theme. I've always wanted to visit Hong Kong. Very interesting post.

I agree -- this week's has been one of the more interesting Photo Hunts. :)

really? the escalators are faster there? I wouldn't have thought that. it sounds so much like New York with the screens and lights and public transportation - I think it's the best way to get around any city

Yes, they are. Either that or the rest of the world's has been programmed to be slower! ;b

And re comparing Hong Kong and New York: they are both big cities but I think Hong Kong's public transportation is better (and less scary). :)