Last week, I put up the first batch of photos taken while hiking from Shui Hau to Shek Pik Reservoir. This Sunday, I hope to go on another Lantau Island hike. Sadly, the last time I checked, the weather forecast is for it to be misty (albeit "with sunny intervals") on the day. So unless things change radically, I'll not be able to take photos with views as clear and beautiful as I did back the most recent time that I went hiking on Hong Kong's largest island... :S 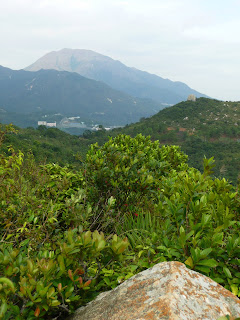 To recap: A friend and I began our hike
at the village of Shui Hau which can be seen
in the now far distance in this photo! 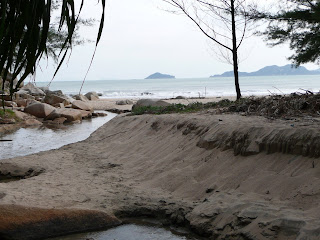 The lowest point we got to in the hike:
the beach at Lo Kei Wan
(which is home to an official AFCD campsite) 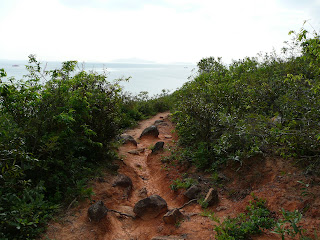 Not long afterwards, however, the trail took us to
higher elevation and an area with far redder soil 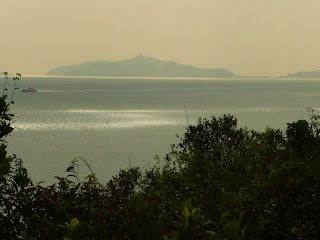 Skirting the coast as well as hugging hillsides,
we came by scenic sea views such as these 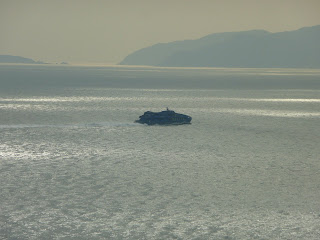 ...and these (and for those wondering, that vessel's
one of the many that regularly ferries passengers
from Hong Kong to Macau (and back again)) 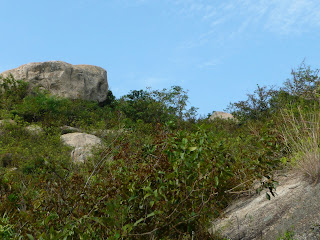 When out hiking in Hong Kong, I see rocks
that, with a bit of imagination, can bring to mind
images of animals -- e.g., can you see
a prehistoric monster's head on the left of the photo? ;b) 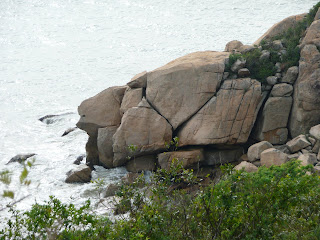 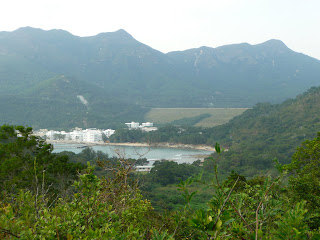 Looking from still some distance towards
the hike's end destination of Shek Pik Reservoir
(and those are not resorts below it, but, instead
Shek Pik Prison and the Sha Tsui Detention Centre
that gets me thinking of Herman Yau's often overlooked
From the Queen to the Chief Executive)

Looks like a fun hike. The red dirt with the big stones in the path is so cool. Also like the ocean photos. The one with a small bit of sun making part of the water shimmer is very nice. Hope you take more photos this weekend. Misty sounds like it could be interesting.

Are the hikes you go on rated as to difficulty? From the photos this hike looks easier than some of the others you've photographed.

It was a fun hike -- and moderate in difficulty. (And yes, my hikes are rated on difficulty -- not just by me but also the hiking guide books that I regularly make use of.)

As for this week: Am still hoping for less rather than more mist. Among other things, I think it's way safer to be able to see where you're walking!!! ;(

There's no place for a brontosaurus to hide. lol