At the anti-extradition bill rally in Central last night 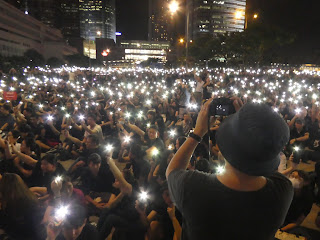 All lit up last night at Edinburgh Place! 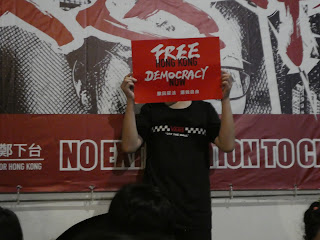 A number of anti-extradition bill protests took place in Hong Kong yesterday  Along with what turned out to be a whole lot of other people, I went to the one scheduled to take place at Edinburgh Place but which turned out to be so large that it overflowed into nearby areas.  Arriving 15 minutes or so before the official start time of the protest rally, my friends and I found the area in front of the stage already packed to the brim; so we ended up sitting behind the stage along with thousands of others!

In keeping with its aim of seeking the support and attention of the world (notably members of the G20 international forum, whose government leaders and central bank governors will be meeting in Osaka tomorrow and Saturday), this particular protest event was the most multi-lingual I've ever attended anywhere in the world.  Featuring speeches in Japanese (the language of the hosts of this week's G20 Summit), French (by Cantopop singer-actress-activist Denise Ho), Bahasa Indonesia, Mandarin (which, with some Taiwanese words thrown in, indicated that it was targeted more for a Taiwanese than Mainland Chinese audience), Spanish, German, Korean and Italian as well as Cantonese (Hong Kong's most widely spoken language) and English (which still is one of Hong Kong's official languages)!

Surrounded by thousands of others seeking the same outcome(s), it really did feel like a case of Together We Thrive -- the slogan emblazoned several times during the night on the front of the HSBC headquarters nearby!  The sense that the evening's unexpectedly large crowd were unified in purpose and one in spirit could be particularly felt towards the end of the two hour long event, when enthusiastic renditions of Les Miserables' "Do You Hear the People Sing?" -- first in Cantonese, then in English reverberated around the area.

A good sign that there really were a lot of people at the rally came from the sight of the sea of lights that were created after a number of participants decided to switch on their mobile phone lights and then wave the phones up in the air.  Even more so was the fact that the singing and chanting echoed around through to, and out of, parts of the crowd that the tall buildings and such in the area made it so that those of us actually at the event could only ever see a very small section of it.

After the rally ended, a friend and I elected to walk over to Wan Chai rather than brave the crowds we knew would clog up the Central and Admiralty MTR stations.  It was only after we got to the other side of the stage that we saw that our section of the crowd, which had stretched as far as to the Two IFC (International Finance Centre) Building a few hundred meters away that we realized how section of the crowd where we had been actually was far smaller than that in front of the stage -- and were filled with awe once again at the willingness of Hong Kongers to turn up en masse for a cause they care for and obviously consider very important indeed.
Posted by YTSL at 11:59 PM

G;ad to see people rallying, and speaking up.
Coffee is on

Thanks for your support. As I tell people: one reason why I participate in protests and speak up is because I (still) can and don't want to see a time come when I can't in Hong Kong.