Feasting on Penang durian during what's turned out to be a late, short and not particularly bountiful 2017 season! 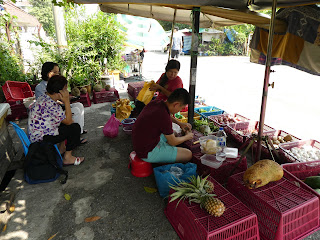 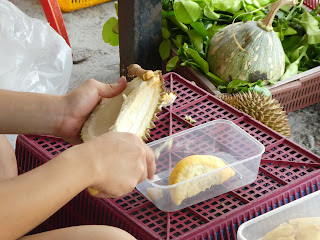 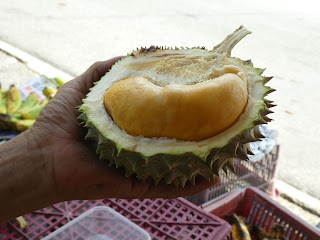 A beautiful sight as far as durian lovers are concerned ;b
In July of last year, I flew back to Penang to feast on durians.  And when I was back in Penang last May, I asked my mother to let me know when the durian season for came along this year so that I could consider doing the same again in 2017.
Unlike in many other parts of the world (or even other parts of Malaysia), there's only one durian season a year in Penang.  In years gone by, this spiky seasonal fruit would be available in May -- and even as early as April.  So I had hoped that I'd be able to sample some durian on my May 2017 visit.  But while I did manage to eat well then, the king of fruits was -- alas! -- not on the menu.  Instead, I had to wait -- like last year -- until July to get my hands on some durian (which, yes, I proceeded to eat with rice bathed in coconut milk and sprinkled with gula melaka).

The late arrival of both the 2016 and 2017 durian seasons has been ascribed to the rains having fallen at the "wrong" time of the year.  In other words, durian connoiseurs in Penang have become all too aware that climate change really is a thing.
As it turned out, this year's durian harvest also has been way smaller than normal.  Stories have been told of trees having had fewer flowers than usual and many of the flowers not having borne fruit.  Indeed, so bad was this year's yield considered to be that at least one Catholic mass was held in Balik Pulau -- where Penang's best durians are grown, and a Catholic congregation was established and a church founded as far back as the mid 19th century -- to enlist divine help for the durian trees and their owners!
In addition to this year's being a disappointingly small harvest, the 2017 durian season also has been shorter than usual: lasting just one month or so rather than the more usual two or three.  So it was with some urgency that on my first full day back in Penang this month, my mother, a family friend and I went hunting for durian at a couple of places that were located quite a distance from each other as well as could be said to be off the beaten track (since they aren't located in Balik Pulau per se, Macalister Road (where many tourists now go) and Anson Road (where one particular seller famously hawks the notoriously expensive Musang King)!
At the Jelutong Market stall that my mother favors, we were told that this might well be the last week for durian -- or, at least, those from the favored old trees that the sellers had access to.  As it was, the crop that was left, while good, yielded fruit that was on the small side -- and they had no more ang heh (red prawn), my favorite durian, available.
And while we did find -- and buy -- one red prawn durian at a stall in Kampung Pulau Betong located close to the eatery where I had lunched on fresh seafood with my German friend, my mother and a group of my mother's friends this past May, we -- including the seller -- were shocked to find that the admittedly small-sized durian only had two seeds within it!  Adding to the improbability of it all was the second durian that the seller opened having just three seeds in it -- rather than the usual five, six and more than one expects to see when opening a durian!

It may seem like small consolation but I must say that quite a number of the five durian in total that we ended up buying was actually pretty tasty.  And I happily feasted on durian that evening and the next; only foregoing doing so a third night in a row because the "heaty" fruit caused me to have a sore throat after my having had just two durian dinners, during which I consumed 11 seeds worth of durian (but, actually, just the pulpy fresh surrounding the seeds but not the actual seeds) over the course of those two meals! ;b
Posted by YTSL at 10:05 PM

Interesting article. I'm feasting on tomatoes off the vines (a friend's not mine). I don't think I've ever had durian. I googled and it looks like something I've seen on the ground around a tree at a park but probably not or I would have heard about it (at least I think I would have).

I doubt that you'd find durian growing in North Carolina. Maybe if there's an Asian supermarket near you though, you might catch sight of the fruit -- and/or smell it (as it's infamously strong smelling)!