Today was festival day in Hong Kong -- what with it not only being the day that Buddha's Birthday is celebrated in this territory but also the Cheung Chau Bun Festival as well as the less well known Birthday of Tam Kung. At first, I hadn't planned on witnessing any of these festivities but this morning, found that at least one of it would be pretty hard to ignore.

To wit: I had meant to sleep in as it was a public holiday and I had had a late night last night... However, I wasn't able to do so for as long as I would have liked since at some point in the morning, I was woken up by the sound of lion dance drums being played! Getting out on to my balcony, found that lion dance troupes were passing in open roofed trucks on the road down below! 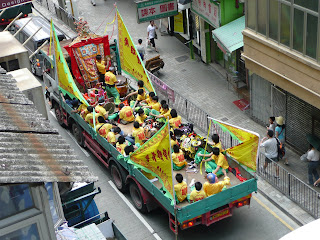 Photo taken from my balcony! ;b

From the direction that they were heading, surmised that they would be part of the parade in Shau Kei Wan to honor Tam Kung. And this afternoon, when I visited that part of Hong Kong Island, I was proved right with quite the remarkable and colorful as well as festive sight of dancing lions, dragons and unicorns parading in the streets... :) 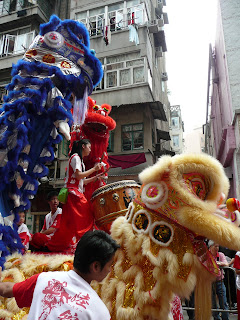 One of the first sights that greeted me
-- a female drummer
surrounded by different colored lions
(BTW, Just One Look, anyone?) 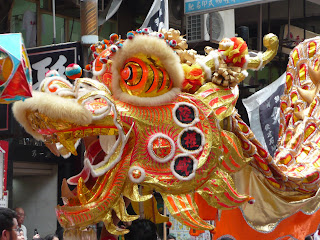 Is it me or does this dragon look like it's grinning? 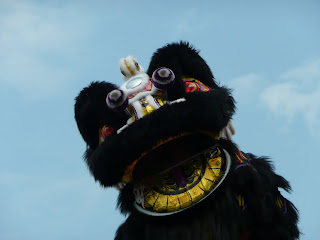 Ditto re this lion 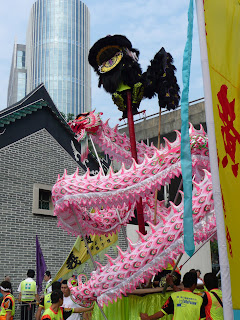 ...from its impressively high vantage point! 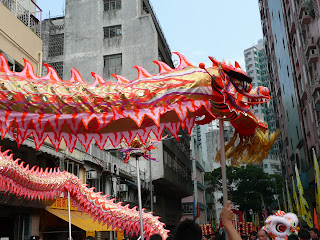 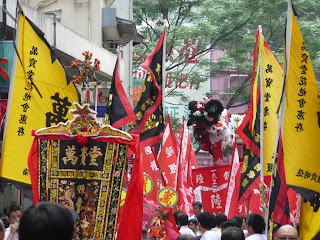 How would you like for a parade like this one
to take place on your street? ;b 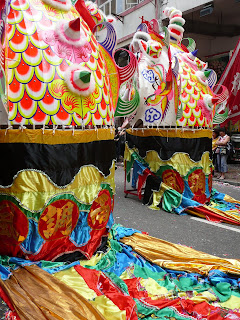 Colourful when viewed from the back 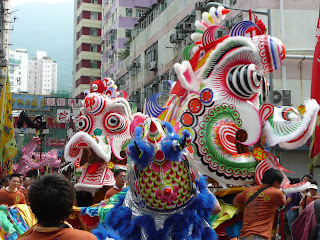 ...but even more impressive
when viewed from the front? 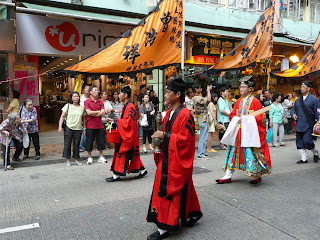 Admit it Hong Kong movie fans: It's impossible to
not think of Mr Vampire and Lam Ching Ying (RIP)
when faced with this sight, right?


So... enjoyed and want more? If so, do please let me know as, to put it mildly, I kind of went snap happy this afternoon in Shau Kei Wan! ;b

So I for one will be very happy to see more of them.

P.S: And allow me to say that your photography is improving (it was already very good but now even better)

I always have movies on my mind so I'm glad you admitted that that shot made you think of Mr. Vampire -- I don't feel like a stupid gweilo for immediately making the same leap in my head upon seeing that real life image!

I am still anxious to see what you think of Dancing Lion!

And hopefully you could review it and provide some local detail on it as I'm sure that, as much as I enjoyed it, I'm still missing some specifics.

You don't like lion dance music? Really??? (This coming from someone who as a kid wanted to be a drummer...)

On another note: Thanks for thinking that my photography is improving. Goodness knows I've got a lot of practice since moving to Hong Kong. :)

I, too, always have movies on my mind. It's hard not too when one is living in what can seem like a giant movie set... ;b

What an colorful and exciting event. I think I'm a little jaded about lion and dragon dances. I'm still struck by the colors though. =)

I've seen my share of lion dances over my life time too but have to say that I still get a thrill out of watching them. Dragon dances, OTOH, are still pretty unusual for me -- and all the more unicorn dances (which the Tam Kung B-Day Parade also had)! :)

Of course I've never seen this in real life so I think it's wonderful. None of the dragons look particularly fierce, but they are such glorious colours!

Think you owe yourself a lion or dragon dance sometime in the near future... Maybe if you go to London's Chinatown next Chinese New Year...? :)